CHIZ tells MLQU Graduates: Be Partners in Nation-Building to uplift lives of Filipinos

MLQU LIT! – 2nd in the series for Applicant Engagement 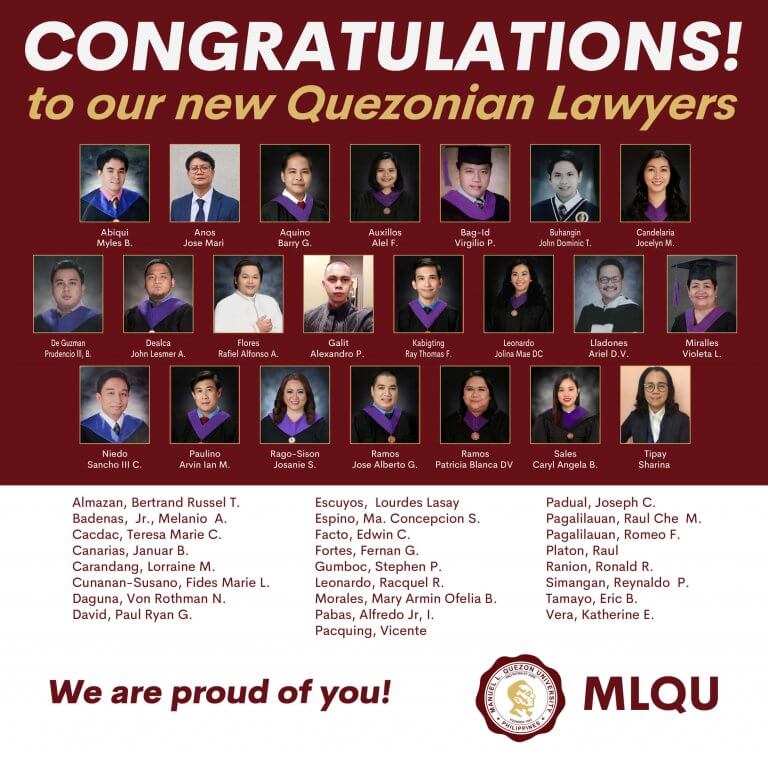 Last April 12, 2022, the Supreme Court released the results of the 2021-2022 bar exams, the first to be held digitally because of COVID-19 pandemic and after almost two years of waiting due to the global health crisis.

A record high of 70. 30% made the grade. Among them were 47 graduates of MLQU, most of them first time passers, including those who graduated in 2019, 2020 and 2021 but only received their diplomas during the pandemic-delayed hybrid graduation ceremonies held last March 12, 2022.

This represents a 70% passing rate for the batch that took the exams this year in spite of the challenges posed by the pandemic and the digital mode of taking it.  This percentage is one of the highest in the records of MLQU School of Law. It would be recalled that in 1948, MLQU’s first batch of law graduates registered a passing average of 97.5%! The following year in 1949, the next batch of law students all passed the bar exams registering a rare 100% passing average, the highest on record in MLQU School of Law’s history.

It should be noted that this is the first time that the announcement of results veered away from the traditional 10 Topnotchers, representing the top 10 highest scorers of the bar exams. This year, instead of a Top 10 roster, the Supreme Court released separate lists for exemplary passers and excellent passers, according to Associate Justice Marvic Leonen, who chaired the Bar exams. Many have lauded this new practice, hoping that it will do away with the “topnotcher culture” among Filipinos, which many see as fostering  school elitism among students and alumni of some prominent law schools in the country. One observer noted that “more examinees deserve recognition other than the top 10, and of course, everyone deserves recognition naman talaga to begin with.”

MLQU School of Law Dean Ferdi Negre hopes that this outstanding feat is the first step towards reclaiming the acclaim and prestige that MLQU School of Lawhas held among law students in the past. He is confident that with its infusion of new faculty members and the repurposing of its program to meet the changing needs of the future, the newly invigorated MLQU School of Law will produce more graduates who will not only pass the par but raise the bar of justice, in keeping with ideals of its founders as well as its motto: pro patria et jure.

Congratulations to the new paneros and paneras! For those who didn’t make it, try again next year!